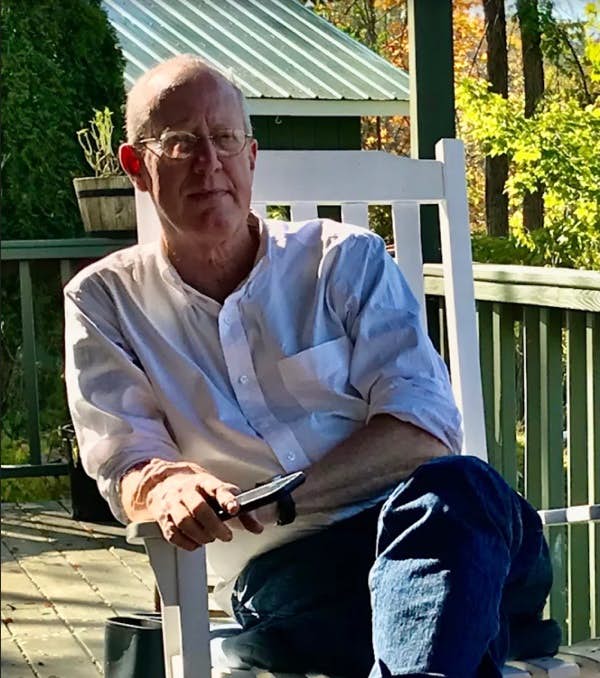 All items below were hand printed by Barry Magid at the Center for Book Arts in New York City using a Vandercook press. The Center is an artists’ cooperative, providing access to presses, lead type in a variety of fonts for hand setting and bookbinding facilities. Monotype for larger projects was provided by M&H Type of San Francisco and custom bookbinding for editions of cloth bound books was done by Campbell-Logan-Bindery, Minneapolis, MN. Below is a checklist of the items purchased by the Library of Congress.

Read A Memoir of the Dim Gray Bar Press

Williams, Jonathan (1994) Letters to Mencken from the Land of Pink Lichen. 1/75 signed copies each with a tipped-in photo of pink lichen by Williams and illustrated with a caricature of Mencken by Davenport. Signed by Williams and Davenport.
Also: another copy, “trial binding” with letter from binder laid in.

Harrison, Jim (1992) The Raw &the Cooked. 1/100 signed set in Centaur monotype and bound in paper covered cloth boards. Also: a trial copy (numbered & signed) but with a printed cover label that was never used for the rest of the edition. Prospectus laid in.
Another copy, 1/26 lettered A-Z, quarter bound in morocco with boards covered hand made paper specially infused with garlic and herbs. Copy “A"
Another copy, of the 1/26 edition, unsigned but marked “Author’s Proof”
Also: a set of the long monotype galley proofs

Tomlinson, Charles (1992) William Carlos Williams. An Address on the occasion of WCW’s induction into the Poets’ Corner. 1/100 hand set in Centaur and sewn to wrappers with illustrate with a drawing of the Cathedral of St John the Divine by Deborah Norden. With “errata” slip pointing out the Cathedral misquoted Williams when carving a line of his poetry into stone. 1/50 signed; another unsigned copy.

Nordstrom, Lou (1993) Ars Poetica. Broadside poem. 1/25 with illustration of a heart, after Leonardo, by Deborah Norden.

Davenport, Guy (1994) The Lark. 1/100 signed copies hand set in Centaur and Arrighi and printed on handmade Lana Antique White paper. Bound in boards with dust wrapper of handmade Sekishu paper with illustration by Davenport.
Also: another copy, unsigned with penciled “AP” on colophon.

Matthews, William (1996) Horace Satires II,ii. 1/100 signed, set in monotype Joanna and printed on Arches paper, sewn into papyrus wrappers. With a correction in the author’s hand. Prospectus laid in.

Williams, Jonathan (1997) A Palpable Elysium. 1/10 Portfolio of signed portrait photographs of Bunting, Davenport, Duncan, Laughlin, Metcalf, H. Miller, Pound, Siskind and W.C. Williams. Each photo is accompanied by a letterpress sheet with JW’s reminiscences of the subject.
Also: Another smaller portfolio box containing a full set of sample photos and text from which the 10 were selected. The remainder were eventually published in a trade edition by Godine in 2002.

Father Louie: Photographs of Thomas Merton by Ralph Eugene Meatyard. Introduction by Guy Davenport (1991). In addition to clothbound and paperback editions (edition size unknown) there were two ltd editions: 1/100 with an original photo printed by Christopher Meatyard from his father’s negative, signed by Davenport and the Portfolio edition 1/25 in a custom box, containing both the 1/100 signed book and original prints of all 50 photographs, with a colophon letterpress printed by BM.
Also: 17 pp typescript of Davenport’s Introduction to Father Louie

Williams, W.C. (1988) The Normal and Adventitious Danger Periods for Pulmonary Disease in Children. Reprints WCW’s only published medical article from The Archives of Pediatrics, August 1913. 1/100 with laser printed sheets, stitched blue wrappers. Another copy, brown wrappers, no priority. Not for sale. “For the friends of Barry Magid”

Greene, Jonathan (1993) The Road, Once Taken. Broadside. 1/50 copies printed for JG’s 50th birthday, April 19, 1993 Illustrated with a gnomon drawn by Deborah Norden, printed in green. Not for sale.

Quotes an unpublished letter from W.C. Williams to Harry Roskolenko Aug 31. 1948 : “Of course use my name in applying for a Gug/ And may it serve your purposes / Better than it has served mine. / Best luck/ Williams”

Sappho (2001) translation by Barry Magid 1/50 copies printed on papyrus as a New Year’s greeting for friends of Barry Magid, Sharon Dolin and Dim Gray Bar Press. Jan 1, 2001
Not for sale

Designed and/or Printed by Barry Magid

Ephemera not under DGB imprint

Snyder, Gary, (1980) Why I Laugh When Kai Cries. Stapled wrappers. Unauthorized, private printing 100 copies as a holiday gift “for the friends of Barry Magid & Marjorie Greenberg” plus galleys. (Inspired by Robert A Wilson’s Xmas pamphlets)

Also: The Wedding Announcement of Petra Gill, daughter of Eric Gill with his drawings that were used for our announcement –with the exception of the first which Deborah re-drew so that the bride and groom are standing not kneeling before the altar.

Additional material: 25 zinc engraving wood blocks used to print the illustrations for a various of books and broadsides, including “Belinda,” “The Lark” The Raw & the Cooked,” Ezra,” Letters to Mencken” etc.